"The Evolution of Dad" -- A Review 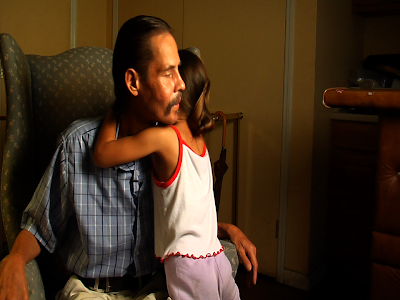 If I were reviewing “The Evolution of Dad” as a fictitious film rather than a documentary, I’d say this film has all the makings of a great movie. There is drama and conflict, triumph and tragic storylines, poignancy and laugh-out-loud humour. And there are enough love stories in the first five minutes of this film alone to make Casablanca look like a war flick.

Like any great film, there are great players. We meet heroes like Kevin Knussman, a Maryland State Trooper who is forced to take on his employer when they refuse to grant him a leave to tend to his ailing pregnant wife. “Do I abandon my family?” asks Knussman, “or do I abandon the job that feeds my family?”

We have our corporate villain who, when told that America keeps company with four third world countries as the only ones on the planet without paid parental leave, responds cold heartedly with, “Well, I guess someone who really wants it should consider moving.”

We have the unconventional and unwitting champion, Ralph Benitez (seen above), whose bravery and self-sacrifice would shame any glossy father of the year candidate. Not only do we discover his once downward-spiraling life is saved by the birth of his own child, but we witness his selfless devotion to his fatherless granddaughter.

Having said all of that, The Evolution of Dad isn’t fiction—it’s fact. And that makes this movie all the more compelling.

Some of you know I run a business which attempts to help companies realize the work life balance challenges faced by dads. Frankly, I should show this movie to all my potential clients, because this movie does a brilliant job of portraying the numerous and unique challenges faced by men who want to be nothing less than a full and positive presence in the life of their children. From working dads who are confined by archaic workplace culture to at home dads who have to fight antiquated attitudes, the men in this movie are trailblazers and heroes.

This film is also a celebration which goes far beyond heroic dads and heart rending stories. And while this documentary tells us the facts about involved fathers and what benefits they bring to their children, more importantly, it demonstrates a greater truth: involved fathers are good for fathers themselves. They are good for all of us.
Posted by Cameron Phillips at 4:48 PM

Labels: the evolution of dad