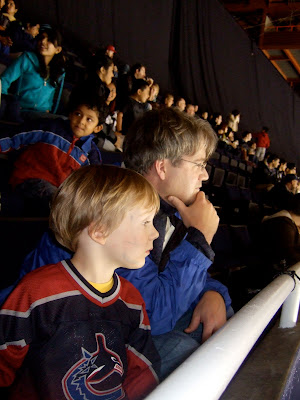 Just before my second son was born, I was finishing up some “nesting” jobs, including installing a shelving unit in my son-to-be’s bedroom. As usual, my 3 year old was helping with his tools and tape measure. His every move seemed to mirror what I was doing. If I grabbed the tape, he grabbed the tape. If I reached for my drill, he picked up his.

At one point, I was in the back yard, cutting the clothing rod with a hack saw while he was working away at a Christmas paper roll with his little Black and Decker. It was starting to sprinkle, so as I finished my cut, I wiped the rod dry under my arm. Connor was studying me intently. Then, meticulously, he took his paper roll and wiped it under his arm.

It would be easy to fall into the “monkey-see, monkey-doo” sermon, here, but I wont. We all know that kids will imitate what they see—that’s how they learn. I think there is another valuable lesson here.

Your child worships you. (Unless he’s in puberty ;-)

We all question our parenting abilities from time to time. We all have days where we feel like if the authorities found out, we’d have our parenting license revoked for negligence or truancy. Whenever you are feeling a bit down on yourself, remember the fact that in the eyes of your child you are a god.

Now this doesn’t mean you get away with a lifetime of negligence and truancy and come away smelling like a rose. It also doesn’t mean that there can’t be great pressure in being a deity in the eyes of your child. What it does mean is that you are entitled to cut yourself some slack.

When I was in the early days of a fledgling acting career, I remember my greatest fear was that something unscripted would happen on stage. Someone would accidently knock over a glass or drop a book. We would then do this odd dance around the object pretending that nothing happened instead of just picking it up and moving on. Then one day a far more sage individual let me in on a little secret: when you forget a line or break a glass, don’t worry about it---the audience WANTS you to succeed.

Your child wants you to succeed, too. More than half the battle is already won the moment your child is born. She loves you just for being you. You don’t have to do anything or act a certain way. Allow yourself to revel in that comforting thought the next time you feel like kicking yourself.
Posted by Cameron Phillips at 12:48 PM