"Happy Mother's day?" redux --or "Why I am boycotting Pampers"

There is an interesting little “dad-centric” event happening going on over at Brian Reid’s Rebel Dad web site.

For those of you who don’t know Brian, he is a pioneer in the dad-blogosphere and a staunch advocate for dads to be recognized as equal parents. To boot, he is a very funny guy.

At any rate, Brian has started an impromptu boycott campaign of Pampers. The reason? Four consecutive years of  letters like this:

Hello BRIAN,
Happy Mothers Day!
Thanks, Mom for all that you do.
On this special day, check out the tribute that Pampers has for you! Come join us and other moms on Facebook and YouTube, and take a moment to share what you love best about being a mother.

Pampers had got Brian’s email address in the first place from their points collecting program. As Brian is an at home dad, he was the one buying the diapers, changing the diapers and subsequently entering the ‘code’ into the on-line points collector.

At any rate, four years of stupidity was enough for Brian so he decided to write Pampers and let them know he’s boycotting until they wake up to the fact that there are involved dads out there, too. Before you know it, people were tweeting things like this:

I'm joining @rebeldad and boycotting Pampers until they recognize that dads do diapers, too. #pampersboycott http://bit.ly/d0dTGY

Now, nearly 10,000 people on twitter have been made aware of the boycott.

A few days later, Brian thought he was getting a peace offering when he saw something from Proctor & Gamble (the makers of Pampers) in the mailbox. However, what he got was this: 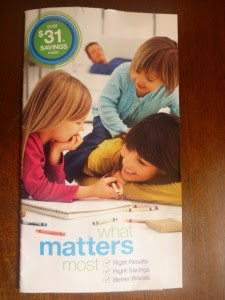 I don’t know if you picked it out at first glance, but while mom is playing happily with her two kids, dad is SLEEPING ON THE COUCH!

In my business, I do a lot of talking about the forces at play which make it hard for men to break away from the restraints of the old paradigm when it comes to their relationship with their kids. I argue that society still keeps men at an arms length by reinforcing that mom is the superior, go-to parent, and dad is better serving his family by being at the office. A lot of people scoff at me when I say that. Intellectually the overwhelming majority of us have moved beyond those antiquated stereotypes. However, these sorts of images, subtle though this one may be, serve to do nothing but help keep dad on the couch.

If you are a proud, involved father, speak out. Let people know that you aren’t a lie-on-the-couch dad. And let Pampers know that sort of advertising does nothing but reinforce old gender lines that hurt everybody.

Brian’s boycott on twitter is #pampersboycott and Brian’s twitter address is @rebeldad
Posted by Cameron Phillips at 4:10 PM