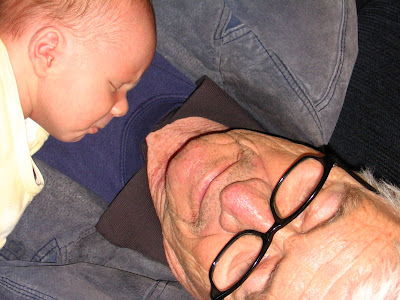 I’ve never met a man who hasn’t been profoundly affected by his own father (though I’ve met many who’ve never recognized it). I am no different.

As I write this entry, I am sailing across the Strait of Georgia from Vancouver to Vancouver Island; my father is having anything from a triple to a quintuple bypass tomorrow morning in Victoria.

I’m long past the age where my parents are starting to appear mortal. Between my parents (and their various spouses) there have been hip transplants, cancers, surgeries and several strokes. It isn’t like I’ve never pondered the prospect of losing one or both of my parents.

I don’t anticipate anything going wrong with my dads operation tomorrow, but still, I can’t help but be reflective. My father is a good man, who like the rest of us, has had his fair share of struggles. He was on the wrong end of two divorces, seemed to have more career setbacks than successes, and saw way less of his four children than he would have liked. He has his passions, too: for Joseph Campbell, Carl Jung and New Physics. For several years he has been working on a book which he feels can change the world. I admire his ambition.

I have regrets in my relationship with my father as I know he has with me. Most revolve around the time (or lack thereof) we spent together. And when we were with each other my father often seemed lost in thought. My dad would always find time to throw a ball or play a game of chess if I asked him, but he was never one to seek that engagement with me.

It’s no surprise then that as a father I seek out unsolicited activity time with my boys and am committed to being fully present to them when we are together. Even when I’m working, I find ways to have them work along with me. It’s no coincidence that my business revolves around helping absent, workaholic dads better connect with their kids.

In many ways, the mistakes our fathers made can be the greatest gifts they ever gave us. This isn’t to beat up on fathers by any means. This is borne from a sense of optimism that fathers and men are slowly evolving, and that awareness is the next step in that process. I certainly hope my sons will one day be able to learn from my countless parenting gaffes and become better fathers as a result. I want to know that my scaring errors won’t be in vain. Don’t we all?

I know my father feels very deeply that there are no accidents—that everything happens for a reason. As he goes over the tally sheet I hope he takes great comfort in knowing that I am a better father for having him as a father.

This past June, he sent me a Father’s Day card. In it he wrote, “You are the best dad I’ve ever known.”

It would appear he recognizes that his mistakes were not in vain.
Posted by Cameron Phillips at 6:16 PM