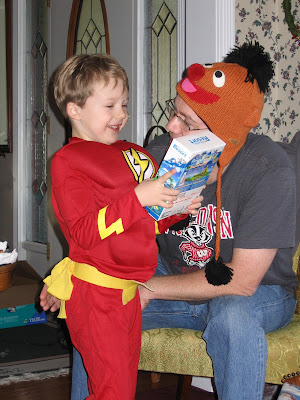 Sorry for my lack of regular posts of late. I am now balancing solo at home parenting (as my wife has gone back to work) with a working dad project for my company “Bettermen Solutions.” At any rate, I know holidays can be very trying, but I hope everyone had a happy one. As some wise person once said, “If you think you are enlightened, try visiting your family.”
The challenges for me this Christmas stemmed from the same source of many of my joys: mainly, my four-year old, Connor.
Christmas doesn’t get much more magical than when you are four—old enough to “get it” and young enough to believe whole heartedly. Not surprisingly, the verbal lists of “I want, I want, I want” began sometime after Hallowe’en and seemed to grow longer by the day.
I didn’t want to quash his pure joy, but I also didn’t want the season to be about greed and “give-me.” One potential solution came to me during one of our bedtime routines.
Some nights, instead of a book, we have “Once Upon a Time”. This is when I make up some story where Connor is the protagonist. It usually involves adventures, dinosaurs and/or Batman and Robin. On this night, it involved Santa and some sorry and destitute children.
It is worth mentioning that Connor’s greatest wish this season was for a Wii. The immensity of his desire had little to do with the monetary value and everything to do with fun. In his mind a Wii cost the same as a chocolate bar, so holding this Wii so dear was solely based on Connor’s love of playing it this past summer with his older cousins. My wife and I have both wanted to put off video games for as long as possible, but saw some merit in having an indoor sweat inducing activity on a nasty winter’s day. We finally agreed and the grandparents generously offered to chip in for one from Santa.

So as we were getting into bed for once upon a time, I started to make up a story. It involved one excited little boy writing a long list of things he wanted from Santa for Christmas. On Christmas Eve, a sound asleep Connor was awakened by a tap on the window. It was St. Nick, and he wanted to take Connor on a little adventure.

“Will you come with me?” Santa asked.

"I have to ask my mom and dad first,” my son replied (no fears that he’ll ever be abducted by a man in a Santa Claus outfit!)

So off they went. Santa whisked Connor up into the sky, drawn by his familiar reindeer with snow whistling all around. At one point, Santa pulled up to a broken down little home and asked Connor to peek inside. Connor saw a little boy, asleep, with no presents, or even a Christmas tree. At that moment, Santa pulled a Darth Vader light saber out of his bag.

“Connor,” I began to ask in Santa’s voice, “What should I do with this light saber?”


“Give it to me,” my son whispered under his breath.
“I can understand why you would want it, Connor. But you are blessed with so many toys and this little boy will wake up tomorrow with nothing. Now, what do you think I should do?”
“Oh, alright,” he relented. “Give it to him.”
Over and over, the same scenario played out: Santa stops at the home of an impoverished child, pulls out a gift, and asks what he should do with it. Now the really cruel part was that each present Santa pulled out of his bag was one that Connor had asked for. It was bordering on torturous for him as he gave away toy after toy that he so coveted. It was becoming unbearable for Connor, but Santa still had one house left.
At the home of the last penniless child, Santa pulled a brand new Wii out of his bag. Before I could even ask the question, Connor’s face twisted up like some captured and tormented spy at his breaking point, “Not the Wii!” he groaned in a sort of anguished guttural whisper.
To his credit, he still managed to give it up.
The story ended with Connor waking up on Christmas morning with a whole pile of presents, and a note:
“Dear Connor,
Always remember that Christmas is about the giving.
Love,
Santa.”
Posted by Cameron Phillips at 12:59 PM