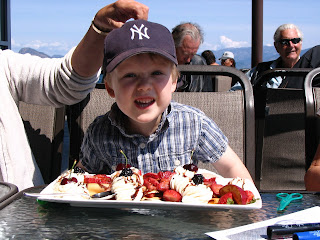 I’ve been having some epic battles with my son these past few days. I don’t know if it’s been in direct relation to our sleep training (see previous post…hell, see all the posts, they are really good!) but he has been as hard nosed as I’ve ever seen him.

My son has been defying me at every turn. This isn’t like him, nor is it like me to have to be much of an authoritarian largely due to his happy, compliant nature. The bulk of the standoffs have to do with me asking him to do things. He has also taken his independence to a new level. I can’t do anything for him at the moment—pour his milk, brush his teeth, wipe his bottom—without huge resistance. Now I am all for independence as well as learning, but at 3 1/2 , if he does any of the above on his own, he’ll be swimming in milk, riddled with cavities and stinking like poop. Not even the usual, “let’s do it together” for the afore mentioned tasks seems to placate anymore.

My cool and patience has been tested a lot in the last few days. But every time I come close to needing my own “time out” I’ve tried to focus on the positive; my little boy is growing up. Whether as an act of protest or learning, my son is gaining independence daily. I remind myself that this is a good thing; I want my son to be independent. Much better that than the opposite. It’s funny, however, that each little step towards his own independence, even at this age, is a further creep towards me letting go.

That is my tip for today. At times like these, when your child is railing against any attempt at help on your part, let it go. If it takes him five minutes to button his coat, so be it. If he spills a little milk trying to pour it, well, we all know what they say about spilled milk…

I’m not saying it isn’t frustrating to be told, “let me do it” at every turn. But it’s probably no less frustrating than being told when to get up, go to bed, what to eat, what to wear and when to pee. At times like these, take pride in your child and her desire to be independent.
Posted by Cameron Phillips at 9:48 PM