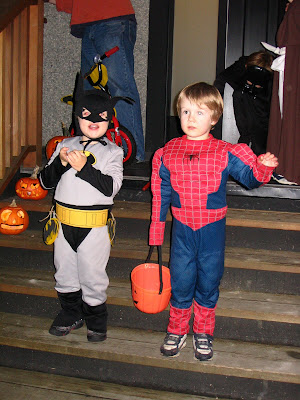 One of my favourite bastardized sayings is, "If you don't like someone, try walking a mile in his shoes. After, if you still don't like him, at least you'll be a mile away, and you'll have his shoes."

Have you ever tried to walk a mile (or at least a few blocks) in your child's shoes?

We were out trick or treating last night, and found ourselves in a scary alley. A group of neighbours had put together this wonderful display that ran the length of the alley. It started off as mildly spooky, and concluded with the Grim Reaper swiping at you with his scythe if you tried to pinch any of his chocolate.

At any rate, we had just entered the alley, and it was packed. I saw a few parents leaving with children who were less than amused by some of the scary stuff. At that moment, I squatted down to help my son put on one of those glow in the dark bracelets that one of the alley hosts had just handed to him. While I was down there, I just happened to look up.

It was overwhelming! There were all these large bodies in dark costumes and strange masks swirling and racing overhead. They had little regard to what was going on down at their feet. At that moment I was swept with a sudden realization of the perspective of a three and a half year old. It was quite remarkable, frankly, that his little head didn't explode (though that would have been a cool Halloween effect ;-)

As an aside, he made it to the very end of the alley, standing face-to-waist with the Grim Reaper. With all the courage he could summon, and with a scythe swooshing down, he managed to grab an Oh Henry from the bowl. I was so proud of him. Not for cheating death, but for soldiering his way down that alley when he really must have felt like he was being swallowed up by a swarm of strangers.

Don't forget to get down to your child's level from time to time. It will give you a sense, or at the least, remind you, of the challenging perspective they face every day.
Posted by Cameron Phillips at 9:20 PM