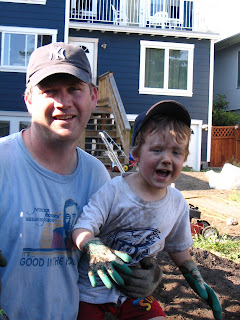 I’ve been doing still more hammering and sawing preparing for baby number two’s imminent arrival (which makes me sound far more adept at using tools than I really am.)


This morning I was putting up some more shelves in the guest room closet when my son came into the room wanting to play.

My first instinct was to do the, “Just a minute, I’ve got to finish something first” routine. I realized that I was going to be saying, “Hold on a minute” about fifty times before I could stop and play, so I just told him to go and get his tools.

Within minutes, we were both hammering and drilling away, fixing up the closet. I would ask him to measure something for me (he loves tape measures) or to mark some lines where I would need to cut the wood. He would shout out things like, “It's forty seven, dad” and I would thank him for his help.

As I’ve mentioned before, it doesn’t take many instances of a father saying, “Not right now, I have to get this done” before a child feels like they are second fiddle. Now this is not saying that you should drop everything every time your child wants you—learning patience is a valuable lesson—but if you can engage them while you are doing your important work, isn’t that so much the better?

Next time they want your attention and you are in the middle of important work you can’t put down, try to find a way to include your child. Drawing plans? Get them to draw some, too. Writing a report? Get them to sit with you and write a story—or just squiggle some lines depending on the age.

It won’t work every time, but when it does it will make your child feel valued and wanted. It will also strengthen your sense of togetherness.
Posted by Cameron Phillips at 10:10 PM