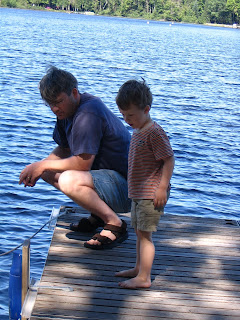 Think back to your childhood. When you were a boy, what did you think it meant to be a dad?

First of all, you probably thought dads were supposed to go to work; dads were providers. Dad set the rules and meted out the punishment if you broke them. It was dad’s job to make things and fix things. Dads were tough and strong and never cried. As you hit your late teens you probably became convinced it was also your dad’s job to be a clueless asshole who made your life miserable (that’s a knock on you, not your dad, by the way…hard to be facetious when you’re blogging sometimes.)

The point here isn’t to knock your father at all. Dads who worked, fixed things, maintained discipline, provided for their families and tormented teen agers were doing essential and laudable duties. This is what society expected of a dad forty, thirty, even twenty years ago. By society’s definition, men who did the aforementioned were candidates for "Dad of the Year."

Being a great dad is about balance. Try to keep this in mind the next time you feel like you have to put your “dad” hat on. All you child really ever wants from you is time and unconditional love. Make sure, no matter how much or how little that time is--that it is undivided and open hearted.
Posted by Cameron Phillips at 10:50 PM