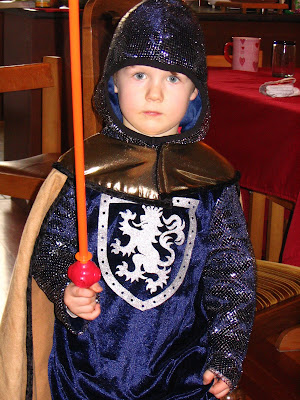 Already programmed to save damsels in distress!
When it comes to gender issues and kids, as individuals we can all celebrate differences and we can criticize practices and beliefs which seem outdated. I still feel that society as a whole, however,  reinforces some  gender stereotypes. At a very early age, little girls are pressured to become women and little boys are channeled to grow up to be men. You don’t have to look far to find examples.  When have you ever seen a TV ad with a little boy playing Barbies? Or a little girl pretending her GI Joe truck is under attack?

Though I celebrate the differences inherent in gender, I have never pushed that “boys do this, girls do that” crap on my son. I have never admonished him for showing his emotions. I have never told him to stop crying, be tough or “suck it up.” And I think I’ve set a fairly good example for my son by not hiding my tears in front of him on numerous occasions (usually when the Mariners lose.)

This is why I was so disturbed by something that happened to my son the other day. I was dropping him off at daycare, and had to talk to his teacher for a moment. When I was ready to go, I asked my son if he wanted a hug good-bye. He went to leap over some toy to get to me, had his feet taken out from under him, and came crashing down hard on his tailbone.

Both my wife and I have never been a “sprint-to-your-child-the-moment-he-tips-over,” parent. Our philosophy is to wait a second or two to see how he will react on his own and then provide him with what he needs. Sometimes, however, you can tell right away that a fall is a big one, and this was a big one.

I scooped him up and asked him if he was ok. He was choking back the tears as he said he was fine. I kept rubbing his bruised little bottom and was using empathetic language, “That must have really hurt. That was a big fall!”

“I’ll be ok, daddy” he winced, and limped off to play with his friends.

I was shocked. Neither my wife nor I have ever told him to be tough…to be strong. So why was he compelled to choke back the tears?

Could it be that at the age of 3, my son had already been flooded with enough examples of boys being tough that it conditioned his response?

I don’t have any answers, but I do have a reflection. If society puts that much pressure on our sons and daughters to act like “men” and “women” respectively, we owe it to our children not to reinforce the negative stereotypes. Afraid too much roughhousing with your little girl will make her “less feminine”?  I wouldn’t worry about it. Think that being to affectionate with your son will make him into a “sissy”? Not likely.

Hell, I’m the “sissy” in our family and look what sort of a “tough” son I have!
Posted by Cameron Phillips at 5:49 PM