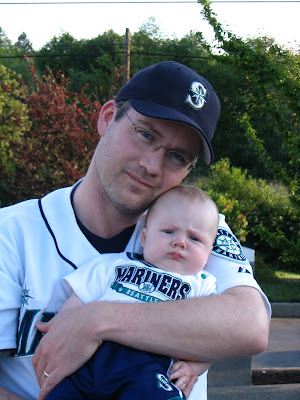 This blog for the most part, is about dads and kids, and childhood joys and fatherly revelries.

Today, it is about baseball.

I have had an obsession with baseball since I was a boy. We are all aware of the clichés surrounding fathers and sons and the greatest game of all time, but they are clichés for a reason: baseball has been connecting fathers and sons for generations. My own father was never a huge baseball fan but he took a greater interest in the game because of my passion for it. In retrospect, that was one of the greatest gestures my father has ever made.

I have been a fan of the Seattle Mariners since they first took to the field in 1977. I was eight, and in the 33 ensuing years since, I have endured much more hardship than celebration. In other words, the Mariners have largely stunk.

In Little League, I was teased mercilessly by my Blue Jay loving friends for rooting for such perennial losers. I didn’t care. I had gone to my first major league baseball game with my dad at the Seattle Kingdome. In spite of the concrete and the artificial turf, the expanse of green was the most beautiful thing I had ever seen. I was hooked. Baseball was magic. The fact that I could share that moment with my dad, whom I saw all too infrequently, meant even more to me.

Baseball elation came to me in earnest in 1989 in the form of Ken Griffey Jr. The Mariners drafted him out of high school and he was considered far and away the best prospect in the game. He did not disappoint. In his first major league at bat, he hit a double. The first pitch he ever saw in his home stadium, he belted a home run. Griffey was the real deal.

Griffey was electric. Every at bat was filled with tension, and the possibility of greatness. Even in blowout games, fans stayed until the end to watch him play.

Early in his career, Junior and his own father became a part of baseball lore, when one night, playing as team mates, the two hit home runs, one after the other. It has never been done before, and it’s unlikely to be done again.

The day he was traded to Cincinnati, I was a grown man, and I cried. Griffey was baseball to me. It was like my first love had spurned me for another.

When Griffey returned to Seattle a season ago, a shadow of his former self, I cried again. Griffey was home, even if he was past his brilliant prime where he could change the course of a game with one swing of the bat—one flash of the leather.

Tonight, I wept a little once again. The greatest Mariner ever to play—the man who saved baseball in Seattle and who was one of the greatest in the history of the game— announced his retirement.

It sounds silly coming from a grown man, but watching Ken Griffey Jr. play gave me joy. Watching him play as I sat alongside my father made it even more meaningful. And holding my first born son at Safeco Field as we watched “Cran” Griffey Jr's (as he now calls him) triumphant return to Seattle, was one of the most inexplicably moving moments in my short tenure as a father.

Thank-you, Junior. You’ll never know how much your playing of a beautiful game with such grace meant to so many.
Posted by Cameron Phillips at 11:21 PM