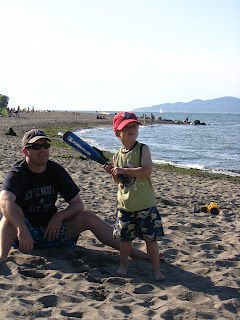 When I was offered a free copy of Jeff Gillenkirk’s first novel, "Home, Away" (Chin Music Press  ) I jumped at the opportunity. As this book is about my two favourite passions, fatherhood and baseball, I couldn’t say no. Had the author somehow managed to incorporate Belgian beer into the plot line, I would have written a glowing review without even cracking the spine.


Before I give a little review, I want to make it clear that I don’t see my blog as a review site. My goal is to help portray fathers as the capable and loving care givers we know we are, to expose some of the unique challenges men can face when it comes to parenting and to challenge men to be the best fathers we can be. Having said that, I reviewed the documentary “The Evolution of Dad ” because it adds to the important discussion of who dads really are. Likewise, I am writing about "Home, Away" because it is a refreshingly positive, albeit starkly honest, portrayal of fatherhood.

The story revolves around an emerging young baseball star named Jason Thibodeaux. Less than a year after pitching in the World Series, Jason turns his back on a $45 million dollar contract to care for his estranged and troubled son, Rafe. This isn’t the first time Jason does such a selfless act. The book opens with Jason redshirting his senior season at Stanford to care for his toddler son while his wife finishes Stanford Law. We learn that Rafe was the product of a one night stand. But rather than running away from his responsibilities, Jason is committed to be the father his absentee-oil-rig-working-father never was.

Over the 23 year course of the story, we go from Jason’s acrimonious divorce, to custody fights, to life as a single dad, to the pain of being unfairly vilified by his ex wife, and eventually, completely alienated from his son. Through it all, Jason struggles with his own demons from his relationship with his father. And although Jason makes mistakes as a dad, wrestles with guilt and at times appears to be taking the easy way out, his love for his son and desire to be an active co-parent is evident throughout.

As both a father who would kill for his sons and a boy who grew up with divorced parents, I found myself living the lives of both characters. Early on, I identified with Jason, sharing his pain and anger as his wife and the courts unjustly took his son away. As Rafe grew into an innocent 8 year old boy I was suddenly in his shoes--feeling his anguish of separation and wincing with his desperate attempts to not disappoint either of his parents.

I love the fact that this story of busting stereotypes is set in the ultra-macho context of professional sports, where all too often the true headlines are about fatherhood indiscretions and actions which hurt, not help, the family. And while at times the baseball side of the story bordered on the fantastical, it was not enough to distract me from this wonderful book.

"Home, Away" is inspiring and heartfelt and would make a great Father’s Day gift for the baseball fan and caring dad in your life.
Posted by Cameron Phillips at 12:34 PM