The Other "L" Word 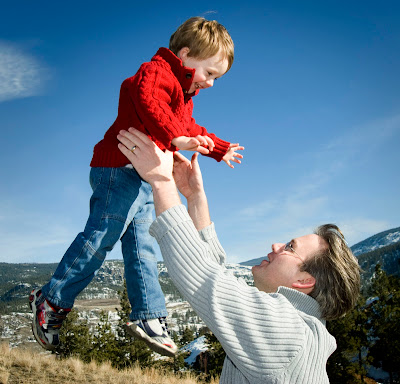 Remember dating? Remember the early courtships—the excitement, the titillation and eventually the feeling that you were really falling for someone? I can recall a lot of those relationships. And I can recollect the anxiety around whether to use the “L” word or not.
I am the first to admit I grew up in a house where we threw the term, “I love you” around like cheap confetti. I’ve never really had a hard time saying those words. In fact, I was actually accused once for saying it too often. Now I realize that perhaps I’m outside of the norm when it comes to men and expressing feelings, but I think most of us can relate to the trepidation around leaving yourself vulnerable by proclaiming, “I love you” for the first time.
So what often came out instead?
“I love spending time with you” or “I love being your boyfriend.”
What potentially sounded like a fear of commitment to a girlfriend is music to the ears of your child.
I get that there are men out there who still aren’t comfortable with, “I love you.” They often tell stories about their own father like, “He never really told me, but I knew he loved me.” Frankly, I think that is code for, “Damn it, why couldn’t he have told me he loved me?” That is totally natural. We all want to be loved, whether we are good with our feelings or not.
Of course, I encourage all fathers to say “I love you” as often as they can to their children. More importantly, I urge them to back up those words with actions.
But I think there is immense value in saying, “I love being your daddy.”
The other day, my wife and sons came home from a friend’s house and my oldest was pretending to be asleep. “Oh, you’ll have to carry him in daddy,” my wife co-conspired.
With his eyes closed and the hint of a smirk on his face, I lifted him out of his car seat. His arms lay limply around my neck as I carried him in to the house.
“It’s too bad he’s asleep, I was going to see if he wanted to play some Wii.” I said, trying to call his bluff. He didn’t budge.
“I guess I’ll have to eat his dessert” I teased.

I turned to carry him up the stairs, and whispered in his ear, “I love being your daddy.”

Involuntarily, his body began to squeeze mine. I was getting a giant bear hug and my son couldn’t help himself.
“Oh, momma, I think he might be waking up,” I said. At which point he went limp again.

“I love you” is a beautiful thing. But on some level, it’s what’s expected of parents. “Of course you love me, I’m your kid.” On a most basic level, child-parent love is as much a product of biology as anything else.
But “I love being your daddy” in many ways can be even more powerful. It almost implies there is a choice in the matter. It’s a value statement. And just like we all want to be loved, we all want to be valued, too.
Posted by Cameron Phillips at 1:03 PM