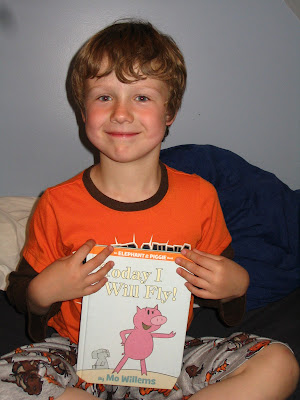 I remember after becoming a new dad, how every little phase seemed to be the greatest.

First, just holding my newborn and feeling his little body rise up and down as he slept on my chest was miraculous (well, I guess it still is.)

Various stages in his development—smiling, walking, learning to fetch me a beer—all elicited this same, “This stage is just the best” response from me.

So you think I would have learned by now.

Last night my son read his first book all by himself (never mind that he is now 37.)

Tired of reading him more Pokemon books (cartoon cock fighting if you aren’t familiar with it), I grabbed something a little more "calming."

When we turned to the title page, he read it aloud. I wondered if that was from memory or from actually reading, but either way, it sparked an idea.

“Why don’t you read it to me?” I asked.  He’s been playing and sounding with words for some time with varying degrees of success.

He grabbed the book, took a deep breath and sounded “To-day…”

I will shamelessly admit that I am proud of my son often for the most trivial of thing—like taking his plate in to the kitchen after a meal, or wiping up the blood without being told after he’s flattened his little brother again—but I have never, ever seen him more proud of himself.

With each turning page, his grin got bigger and bigger.  By the end of the book, he was beaming so that I thought he would burst.

My inner response: “This stage is just the best!”

His outer response: “I’m really proud of myself, daddy!”

Oh, and what was the book that he read?

Today, I Will Fly