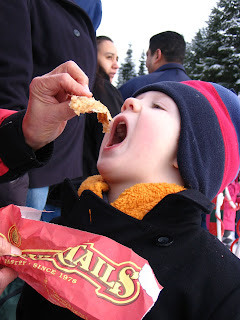 This photo is from a day trip we took over Christmas up a local ski hill (which is currently alarmingly devoid of snow with the Olympics less than a month away.) At one point, while my son was feeding “Dancer” and “Vixen,” I noticed a dad and another small boy. I’m guessing the boy was around 2. His dad kept telling him not to go to this little precipice where the big kids were sliding, warning him that he could slip down the hill and hurt himself.

Sure enough, the self fulfilling prophecy came to be, and the little guy took a ten foot slide. He lay, not hurt physically, at the bottom of the hill, wailing his head off. His dad stomped down the hill, and yanked him up. As he stomped back up the hill, the little boy was seeking comfort from his dad. Dad, however, was holding his son at arms length and sternly barking, “Don’t hug me…do not hug me!”

Now, I don’t want to judge. Who knows what was going on in this guy’s day or life. However, I wasn’t sure what he was trying to prove by not comforting his small son. Was he trying to teach him to be a “man” and not cry? Was trying to impart the idea, “If you defy me, I’ll deny you love”?

I still think to some degree men are expected to teach life’s tough lessons. I think society still generally expects us to mete out the punishment and deliver discipline.

I would have liked to see this dad scoop up and comfort his little boy, wait until he calmed down, and then say, “Do you see why daddy was telling you not to do that?” On some levels, no words were even needed—by tumbling down, this child learned his lesson.

Don’t fall into the tough-guy trap when it comes to giving your child the love and comfort they need. You aren’t going to turn them soft, and there is plenty of time to discuss life’s lessons afterward.
Posted by Cameron Phillips at 9:37 PM