Take a time out! 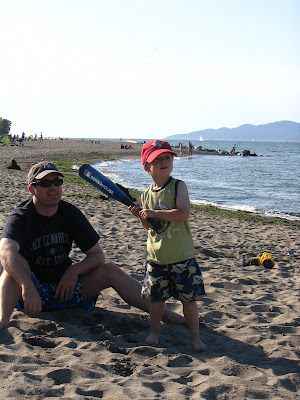 I was reading a great post from Jeremy Adam Smith over at his blog, Daddy Dialectic. It had to do with dads, their sons and the sometimes painful dance that they do around playing sports---in this case, hockey.

It got me to thinking about my own relationship between sports, my father and me. I played just about every game under the sun (ironically for a Canadian kid) other than hockey. I excelled at some, floundered at others, and mainly just tried to have fun playing the rest. My father rarely got to see me play anything. I lived primarily with my mother, and dad lived too far away to come to games. Like many fathers and sons, sports became a talking point, and it was my dad who took me to my first professional baseball, football and basketball games.

When I was ten, our little league team went undefeated. I had been a steady-if-not-flashy important part of the team, and had at least one hit in every game we played. My dad drove the seven hours to see our semi-final, and hopefully, final game. This was the first time he’d ever seen me play.

Well, we won both the semi-final and the championship, but I didn’t get one hit. I think I had more strike outs in those two games than I had all season. After each one I looked to my dad. To this day, I am still grateful to my coach who recognized how desperately I was trying to please my father, and who, in front of me, told my dad how I was a real leader and contributor on the team.

My dad was never a boisterous or pushy sports parent. He never drove me to succeed nor did he ever seem disappointed by any failures on the field. Yet I was still so desperate to impress him—to make him proud.

I once asked retired Major Leaguer, JT Snow, if he pushed his son harder because he himself had played professional baseball. “No,” he said immediately. He said if anything, he pushed his son less because he knows how much pressure a kid can be under if he shows major league potential. “After the game, give him a hug, tell him you love him and take him for ice cream.”

Keep that in mind if your children play sports. They care more about impressing you than anyone else: team mates, coaches, even scouts. Conversely, they will agonize if they feel they have let you down (which, statistically, will happen more times than not.) If they are going to defy the odds and make it to the pros, it isn’t going to be because you barked at them all game long. By having no vested interest in the outcome of the game, and by loving them just for being them, you will be helping to create an environment where your child can thrive—whether they ever win a game or not.
Posted by Cameron Phillips at 4:44 PM