Connor vs. the Zamboni 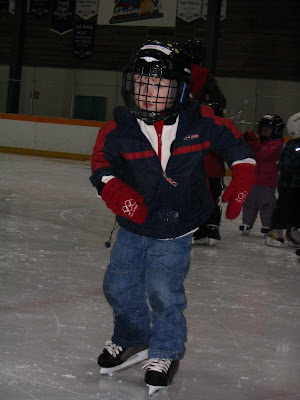 My three year old has been taking skating lessons since just before Christmas. He loves it and he seems very proud of his progress, from learning how to get up from a fall on his own, to gently stepping across the rink, to now taking three or four giant strides before getting scared by his own speed and hurling himself down on the ice. Although my wife and I joke about kissing our future Saturdays goodbye, we have taken such pleasure in his pleasure.

And then something happened.

The other day, at his lesson, his instructor suddenly plucked him from the ice, and skated him over to the boards. He had tears streaming down his face and he kept crying that he didn’t want to skate anymore.

“What is it, sweetheart?” I asked. Did he hurt himself? Were his skates too tight? Did he suddenly have visions of playing for the Toronto Maple Leafs?

I got nothing from him other than, “I don’t want to skate anymore.”

I gave him a minute or two to regain his composure before I tried to send him back onto the ice. He went into ‘limp’ mode, and recommenced with the sobbing. He started screaming that he wanted to go home.

I began with a speech about commitment—about finishing what you’ve started. I reminded him that, after we finished his first set of six lessons, we asked him if he wanted to take another six lessons. He had wanted to take more lessons, so we were going to finish them. If, I went on, he wanted to stop taking lessons after we finished those to which he’s committed, that was fine by me. But, by golly, we weren’t going to quit before then.

Nothing doing! He was having none of it, and I was powerless.

Over the next few days, as I looked back at his behavior, it bothered me. Not that he was crying—I’ve never laid the “boys don’t cry” bullshit on him—but that he just quit. I don’t care if I raise a son who isn’t good at anything; I just want to teach him about trying your hardest and having fun in the process. On the other hand, I told myself, my son is only three, and maybe I need to just let it go.

Shortly after, we discovered that my son was terrified of the zamboni. I had forgotten that the last time he was on the ice prior to the meltdown, he freaked out when the loud buzzer sounded. He thought the zamboni was coming, not only to flood the ice, but to swallow us whole.

There is often more to our children’s emotions and subsequent actions than we know. My son wasn’t even able to really vocalize his own fears though, in his eyes, they were very real. He still won’t step out on the ice, so we’ve decided to hang up the skates until next fall. If he’s going to become an Olympian, a few missed lessons at this age aren’t going to make a difference.

My son’s three year old reasoning and intuition were telling him it wasn’t safe to go out onto the ice, even if he was incapable of articulating that. If you have young children, try to keep in mind that the emotions behind their actions are very real and logical to them -- even if they seem silly or irrational to you. It is really important, especially for us dads who tend to push our children more, to let them come to trust their own instincts. My son was visibly shaken at the prospect of going back onto the ice, though I was hell bent on “teaching him a lesson.” The only thing he would have learned had I thrown him back out there is not to trust his intuition when it comes to his own personal safety.
Posted by Cameron Phillips at 10:16 PM