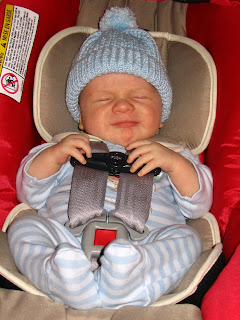 My wife and I are currently finding great humour in a general societal trend we’ve just noticed.

Our little two-month old, for whatever reason, seems to be a very happy baby. If he’s not sleeping, he’s happily gurgling away, either to himself, or to a doting parent or grand-parent. More than once, when we’ve been out in public—at a movie or a restaurant—we’ve had people come up to us and say, “Oh, what a good baby! He hasn’t made a peep.”

It makes us wonder, if he’d been crying the whole time would people say, “For heaven’s sake, what a bad baby you have!”?

This leads me to think about good and bad. I have never uttered the words “good boy” to my sons, and I never will. Why?

Well, let’s say my son does something positive—picks up his coat, takes his plate back to the kitchen, or even hits a baseball. If I say, “Good boy” then what is implied when he refuses to pick up his coat, doesn’t clear his plate, or strikes out? Surely, if doing those aforementioned things makes him a good boy, not doing them makes him a bad boy. I think we teach kids about good and bad early enough that they can easily make that interpretation.

Early childhood educators will tell you to praise or condemn the behavior, not the child. One study I came across aptly illustrates why that is sage advice. In the study, kids were divided into two groups, divided as equally as possible across academic, cultural and socio-economic lines. Each group was given a test. As you would expect, the averages panned out to be more or less the same. Then, for two weeks, one group was told, “Wow, you guys are so smart” with the emphasis being on intelligence. The other group was told, “Wow, you kids must have worked so hard for that test.” For them, the emphasis was on effort. After a few weeks of this pattern, the kids were given the same test again. The group that had been praised for effort saw their average mark go up. In the group where intelligence was lauded, the marks went down.

The researchers came up with two hypotheses. The first was that the praise for smarts made the first group complacent. The second was that, while children could not control how smart they are, they can control how much effort they put out. Praising effort, in other words, was an act of empowering these children.

We all want our kids to succeed. As I’ve mentioned in the last couple of posts, we dads sometimes push our kids hard to achieve, particularly in the hyper competitive world of sports. If you are one of these dads, try to adopt terms like, “great work,” “good job” and “super effort.”

Calling your child a “good boy” when he hits a baseball, by default, means he is a “bad boy” 70% of the time.
Posted by Cameron Phillips at 9:48 AM