Burned as the Olympic Torch passed 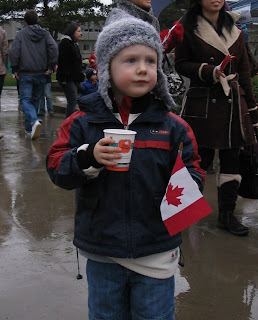 The Olympic torch was passing through our neighbourhood last week, so my wife and I took our two boys out to see it.

Our two month old slept (future Olympic champion in this discipline) but Connor was quite excited. We got some free hot chocolate, a Canada flag, lined the street and then waited…and waited…and waited.

Connor was a little tired, so he sat on my feet. I actually told him to sit on them as the ground was rather watery and I didn’t want him to get his bum all wet and cold.

After a while, my feet were starting to get numb and sore, so I said, “Alright Connor, it’s time to stand up.”

“Because,” I said, before continuing a conversation with my wife.

The little scamp had me.

“You are right, sweetheart. ‘Because’ isn’t a very good answer. I need you to stand up because my feet are starting to hurt.”

“Oh, ok,” he said cheerily, and popped right up.

For some odd reason, I thought of Cal Ripken Jr.  I’ve witnessed him give several baseball clinics, and one of his mantras when he is talking to parents and coaches is, “Always explain the ‘why.’”

His logic is that kids will digest and learn better if they understand why they are doing something rather than just being told to learn it by rote.

I’ll mail $10 to any adult who found “because” or “because I said so” to be a satisfying answer when they were a child. So why do we pull the same BS on our kids? Your kids find it as unsatisfying and maddening as you did. “Because” is nothing more than a power game; it says, “I am more powerful than you, you will do what you are told.”

Don’t agree? If the boss asked you why the monthly report was late, would you ever consider barking, “Because I said so!”?

I’ve said it before and I’ll say it again: dads can be saddled with the lion’s share of the disciplining of a child. By default, our actions in these moments can almost be unthinking—dictated by how we saw our dads act.

I challenge you next time the situation arises to “explain the why”—not only to your child, but to yourself. I can understand, when your child is stringing you along with seventeen ‘why’s in a row why the ‘because’ might come out, but most of the time it is a cop out.
Posted by Cameron Phillips at 12:29 PM